The effects of plant diversity and abundance on primate populations 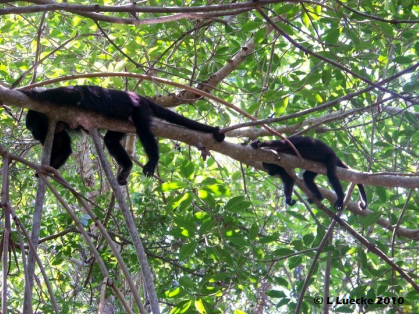 I am interested in the behavior and ecology of primate populations living in "less than desirable" habitats.  Habitats with low plant diversity, meaning there are not many species represented, and low abundance, meaning there are relatively few compared to other habitats, can influence the populations and behaviors of primates living in them.  I use the term "low-quality habitat" to refer to low diversity and abundance, although this is not exactly true.

If the low-quality habitat happens to be a small island or an isolated forest fragment, and the primate population has no access to other suitable habitat, then the effects can be numerous.  If food resources are limited, then one might see changes in the demographics of the primate populations such as a decrease in the number of immature individuals (infants and juveniles).  Such a decrease indicates increased mortality rates of immature individuals due to food shortage and a decline in population density over time, leading eventually, to local extinction.  Limited food resources can also affect the behavior of primates in terms of activity patterns and diet selection.  For example, a reliance on seasonal food items, such as flowers and fruits, can alter the travel, resting, and social behavior of primates who depend on leaves during the rest of the year.

A habitat that is considered low in plant diversity is the mangrove forest.  The term “mangrove” refers to the association of tropical woody trees and shrubs that grow in tidal and saline wetlands.  There are 36 families of plants that form monodominant (dominated by a single species) stands of mangroves or are frequently found in association with mangroves.   Concentrations of sodium, chloride, and plant toxins tend to be higher in mangroves and the mangrove plants are typically pollinated by insects and their seeds are dispersed by water.  The significance of this is that, although mammals, and especially primates, are useful pollinators and seed dispersers in normal forests, the trees in the mangrove do not need them for reproduction.  Therefore, the reproductive parts of mangrove trees are not attractive to mammals so hypothetically, this is not a great habitat for primates.

Note: This is copyrighted material.  If you wish to use any of this information in written form, please cite this website using MLA style (http://mlaformat.org/mla-citations/). 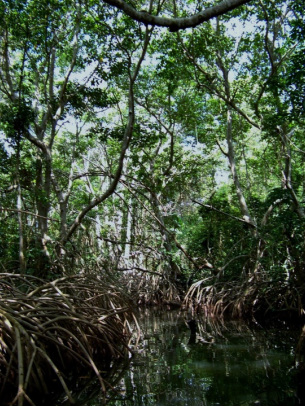 There are reports of primates in mangroves, but few have been studied in detail. In Asia, the most well studied mangrove primates are crab-eating macaques (Macaca fascicularis) and proboscis monkeys (Nasalis lavartus).  Macaques are able to extract high quality food resources from the mangrove in the form of animal materials (two-thirds annually), such as shellfish, amphibians, crustaceans, and insects (1, 2).  In contrast, proboscis monkeys, who do not exploit animal materials and eat primarily leaves, use the mangrove for food and shelter when resources are scarce in other forest or when adjacent forest is being disturbed (3, 4).  In Kalimantan National Park, a population of proboscis monkeys spend much of their time in degraded mangrove forest due to human encroachment and were reported to eat leaves, shoots, spores, and fruits of the mangrove apple tree (Sonnertia alba), the red mangrove tree (Rhizophora apiculata), mangrove fern (Acrostichum aureum) and the smallflower brugiera (Brugiera parviflora) (4).  Other researchers have noted that some populations of proboscis monkeys do not use the mangrove for feeding, but for resting and as a way to move between lowland freshwater swamps, where plant diversity is higher (5).  Researchers report seven other Old World primates that use mangroves for refuge: Temminck’s red colobus (Procolobus badius temmincki), Zanzibar red colobus (Procolobus kirkii), Guinea baboons (Papio papio), green monkeys (Cercopithecus sabaeus), patas monkeys (Erythrocebus patas), and silvered langurs (Trachypithecus cristatus and T. auratus) (6; 1; 7; 8; 9).  Nowak (9) conducted a study on the drinking behavior of red colobus in mangrove and reported that the group that spent the most time in the mangrove (85.4%) also drank (rain) water more frequently than groups spending less time in the mangrove.  The red colobus groups in Nowak’s study were observed to eat young leaves from Sonneratia alba, fruit from black mangrove (Avicennia marina), and leaves from red mangrove (Rhizophora mucronata).  However, little is known about most of the populations of primate species reported in African and Asian mangroves.

Despite brief reports of more than ten species of New World monkeys in mangrove, including four species of howler monkeys, (Alouatta palliata: 10, 11; A. pigra: 12; A. belzebul: 13; A. seniculus: 14, 15), there are no published studies describing the behavior or ecology for any of these species solely in mangroves.

Note: This is copyrighted material.  If you wish to use any of this information in written form, please cite this website using MLA style (http://mlaformat.org/mla-citations/). 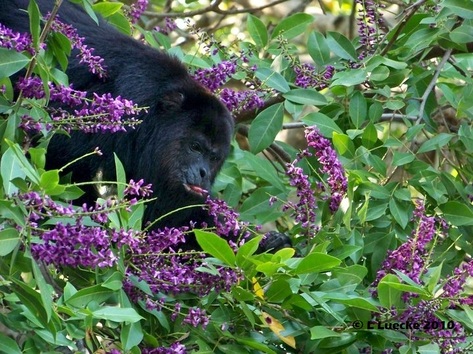 The howler monkeys at my field site on the Pantanos de Centla Biosphere Reserve in Tabasco, Mexico are confined to a 300 hectare island of mangrove forest.  Howlers live in cohesive social groups of varying sizes, but black howlers tend to form relatively small groups of fewer than 10 individuals.  There are 8 groups on the island ranging in size from 3-7 members.

At left: an adult male black howler eating Lonchocarpus hondurensis flowers, the most important food for this population during the dry season.


Note: This is copyrighted material.  If you wish to use any of this information in written form, please cite this website using MLA style (http://mlaformat.org/mla-citations/).